Visualizing your data with charts and graphs is a powerful way to make sense of its meaning in an immediate and compact way. There are a variety of well known methods for creating such visualizations that can better illuminate trends and patterns depending upon the type of data and your goals with representing it.

JClass offers JClass Chart and JClass Chart 3D to create these visuals. The JClass Chart is a charting/graphing component written entirely in Java. It can be used to generate images and image files for client- and server-side use. A corresponding component enables developers to build 3D data views and interactive displays for Java based desktop applications. JClass Chart 3D allows you to create 3D graphics using the Java 2D API for surface, bar, and scatter plot graphs.

Below is an enumeration the types of visualizations you can create with these components along the reasons you would choose to use them.

A plot or line graph shows each series in you data set as connected points of data on horizontal (x) and vertical (y) axes, often placing time on the horizontal axis. This type of graph shows how values change in relationship to each other, such as how the closing value of a stock changes over the course of a week or the unique output of a given equation’s input (e.g. y = x2 - 3).

This makes a line graph an obvious choice if you wish to illustrate the inputs and outputs for a given function where with one variable predictably produces another. Alternatively, you would use a plot to show trends. For instance, a trend line is commonly used to show the value of a stock portfolio over time. Furthermore, given a trend or a predictable output, you can extrapolate new values by assuming that existing trends will continue.

An area chart is similar to a line chart except that the space between the line and the x-axis is filled in with a color or pattern to indicate volume or a physically countable amount as opposed to a more intangible rate. Area charts are ideal for indicating a change and relative value among different data sets and can better communicate that values are cumulative. For example while you might use a line graph to illustrate net changes in population over time, an area chart would be used to show an increase in total population. 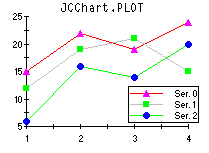 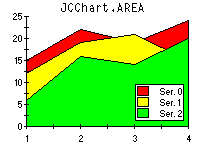 Plot and Area Charts in JCChart

Scatter plots are similar to to the plot graph, but the data points depicted on the x and y axes are unconnected and instead of showing a continuous function, this graph simply represents individual pieces of data to depict how related, or correlated, the values are. This visualization helps to make such correlations clearer when they exist. A correlation you may have observed yourself and intuit is the diameter of a tree’s trunk to its height. However it is still possible to have outliers if you were to measure this data, with trees that are relatively short compared to the overall thickness of its trunk.

Depending on how the points align, the relationship depicted can be described as positive or negative, strong or weak, as well as linear or nonlinear. The more the data points resemble a line as they are plotted from low x to low y values to high x and y values, the more they can be said to be positively correlated (that is to say as one value increases, so does the other). Alternatively they are considered negatively correlated if the graph starts with high y-values and continues to low y-values (or rather as the value on the x axis decreases, the value of y increases). Additionally, data may be divided into groups to determine how closely sets of points cluster together for the purpose of segmenting the data as well as show any gaps or outliers.

JChart 3D adds the option of providing a z-axis to provide an extra dimension to the data. 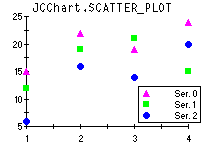 Pie charts are depictions of data that represent categories of the data as triangular slices of a circle radiating from the circle’s center.  These slices are proportional in size to the percentage of the overall circle’s area as the number of members of that category are to the size of data set as a whole.  As such, these charts resemble pies with multiple wedges cut from them that allow people looking at the visualization to easily assess their relative size.

A group of Pie Charts

The legend beside the chart or labels on the graph will indicate what the various “slices” represent as well as their precise percentages.  Pie charts are useful when the number of categories being represented are discrete and relatively small. They are most effective when the proportions are substantially different or there is a specific point / story that can be told based on the data.  For instance, a breakdown of household expenses can show how much you’re spending on food relative to entertainment.

Bar graphs show data as a series of bars across its x and y axes and is one of the most common types of charts you will see.  At its simplest, such a visualization classifies its data into categories or groups, one per bar, with the bars aligned across one axis.  The other axis shows the value of that category/group using the relative heights or lengths of the bars to illustrate their relative weights. Bar charts are flexible and the value being depicted for a given category may represent percentages, totals, or counts.

More complex bar graphs, such as stacked bar graphs, allow those bars to be segmented to compare total amounts across each group or segmented bar.  Like the pie chart, stacked bar graphs allows relative portions of the bar to illustrate the contribution of a given category to the whole. However, the clarity of bar chart can be sacrificed is an excessive number of segments are used in the stack bar graph. 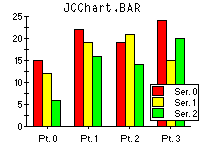 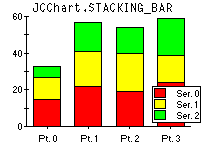 Hi-Lo, Hi-Lo-Open-Close, and Candle are variations of charts that are commonly used way to visualize price movements (i.e of stock) over time showing a price range with its highest and lowest values over a certain period of time, whether it be monthly, daily, hourly, etc.  This is in contrast to showing the data on a plot or line graph where you only have one data point per time period, this visualization allows the viewer to see the range of prices within the time period.

The Hi-Lo allows two series (a high and low value depicted as points placed relative to each other vertically) to be drawn together and the Hi-Lo-Open-Close allows for a 3rd and 4th series to be added as well (as the open and close values for a trading session) with marks along the span defining the high and low values.  That is, if a stock opened at 42 then dipped to 41 before rising to 44 until it finally closed at 43, the bar would reach from 41 to 44 with tick marks at 42 for the open to one side and 43 for the close to the other.  The Candle is a variation of the Hi-Lo-Open-Close where the area between the opening and close being demarcated by a rectangle that is either open or filled in.  Fluctuations beyond those values become wicks and tails. 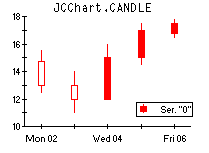 Polar and radar charts show data points in terms of radii and angles and best used for displaying multivariate observations with an arbitrary number of variables.  They plot one or more groups of values over multiple common variables by giving an axis for each variable, and these axes are arranged radially like spokes around a central point and spaced equally.  The higher the quantity for a given category, the further towards the edge of the spoke a point reaches. When reading the chart you can see at the whole shape to see which features stand out and which categories more pronounced than others.  An example of this would be scoring an arbitrary number of gymnasts on a variety of criteria such as execution, landing, difficulty, creativity and style — with each criterion given its own score. Alternatively consider ranking a baseball player by variables like batting average and home runs or cars with axes for speed, mileage, price, etc.

In polar charts, the (x,y) data points for each series are drawn as (theta,r), where theta is the amount of rotation from the x-origin and r is the distance from the y-origin. theta can be specified in degrees (default), radians, or gradians. 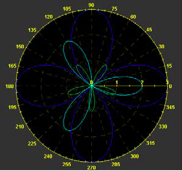 A radar chart plots data as a function of distance from a central point. A line connects the data points for each series, forming a polygon around the chart center. 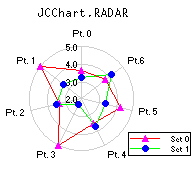 JClass Chart and Chart3D provides a wide variety of options for visualizing your data to meet your needs when it comes to understanding and analyzing patterns, trends and relative values.

For a limited time, Scout Solutions is offering an upgrade to our new and improved versions of JClass Chart and Chart 3D for customers with an active maintenance and support agreement through Quest. With the purchase of a new maintenance plan, you will receive continued access to our JClass Support team who will quickly address any technical issues. Contact us to request your free upgrade to Scout Solutions version of JClass Chart and Chart 3D.

See all
Prev
Next